Bingo-Style Arcade Pinball Machines: Gambling on the Down Low

Mike is a Biologist, Adjunct Professor, and incidental passenger on Spaceship Earth. His writing topic interests are wide and varied.

If you grew up in an urban, ethnic community in or the around the 1940s-1980s, it was a good bet that there was at least one local pinball joint nearby.

The joints were patronized by many neighborhood locals, mostly teen boys and retired gentlemen. Some of the clientele were young or middle-aged adult men too. Some teen girls played the machines. But, adult women never attended a joint, unless it was part of a steakhouse or luncheonette. The joint clientele was composed of all walks of life and occupations in the neighborhood. We'll leave it at that for discretion and anonymity purposes. From personal experience, I am using an Italian, central New Jersey urban neighborhood as my model.

Oftentimes, the pinball joint was located in the front part of a local 'club', where many older gents played cards and solved all the world's problems. More often than not, the pinball clientele and the card players did not associate with each other.

Well, not unless the gents ran out of cigars and asked one of the local teen punks to run to the tobacco-magazine-newsstand 'down the street' to get some two-packs of DiNoboli Toscani anisette-flavored stogies and the Racing Form, which was purly for equine research. This was back when kids of any age could purchase tobacco products. Reportedly, some places sold other items, such as lottery tickets, to underage kids too.

The pinball joint was usually a safe place for kids to hang out, unless some jerky kids came around to roll the younger kids of their loot. Kids had paper route or allowance money to spend, which meant a lot of business for the pinball joint management.

Pinball Machine Selection at the Joints

You gotta remember, many of these joints were established years or decades before any video game was ever conceived. The primary amusement machines were 'bingo'-style games that were made in the 1940s-1960s(?). Some people called them 'hole' machines, due to the pocket-only feature. Some joints had flipper machines and sometimes, novelty machines, such as 'love meters' or 'crane' machines.

The bingo machines were very simple in concept and design, but would take a lifetime to master, that is if you could master any game of chance, which is unlikely.

The play field was full of twenty-five sequential or randomly numbered pockets, surrounded by many bumpers. Twenty-five pockets allowed for a 5x5 bingo card matrix. There were no flippers on the machines.

The back light field usually contained cartoon girls in bikinis or short skirts along with many randomized number 'bingo' cards. The player inserted a nickel into the machine to start the game. Buttons on the machine allowed the player to select a bingo card for that particular game. Additional nickels could be inserted to increase the payout odds and getting more free games if 'bingo' or 'hitting' was achieved.

Each game consisted of five (5) balls. The balls could be shot in rapid sequence to have a completely random game. 'Skilled' players always shot one (1) ball at a time. The player would grasp the side rails of the machine and nudge the the unit ('humping') to try to direct the the ball into the desired pocket. It was really difficult to do. If the played nudged the machine too hard, it would 'tilt' and any remaining balls would be forfeited.

Gambling on the Down Low, QT, and Hush-Hush

So, what do pinball machines have to do with gambling? In most cases, not much. But, in the local neighborhood pinball joints, a lot! Most players would invest $2 for a roll of nickels. If the player only used one nickel per game, that is twenty pinball games for two dollars!. None of the flipper machines offered that kind of value. It would take about two hours to play twenty bingo games.

Incidentally, 'down low', 'Q.T.' (quiet), and 'hush-hush' are old slang. They all have basically the same meaning - where questionable activities are occurring, no one talks about them, or they are overlooked by authority figures.

It was reported that pinball joints were places where the clubs would recruit new, younger members. The new members would serve as couriers or messengers for the club members and management

But, of course, all of those rumors and reported activities were on the down low, Q.T., and hush-hush.

If a player was lucky or skilled enough to get 'bingo', the manager or attendant would reward the player with a cash prize. The amount of the prize depended on how many nickels were inserted and how many 'free' plays were won in that particular game, and of course house rules determined the prize amounts for the games. The player was not obligated to take the cash prize. The player had the option to play the games that were won.

Bingo-style games were a good way for a teen to make a few extra bucks for a couple hours of work. But, more often than not, all the patrons donated their hard earned money or allowance to the house.

Bet365 games mobile. Bingo-style pinball games have pretty much fallen by the wayside, unless you have access to an very old local neighborhood pinball joint or vintage arcade. The bingo games would probably be considered lame and boring by the instant-gratification and video and iphone-era generation. Bingo machines, whether used for entertainment or gambling are a nostalgic testament to arcade history.

If you never saw a bingo machine, here is a video demo. This particular machine in the video has many more additional features than a basic unit. 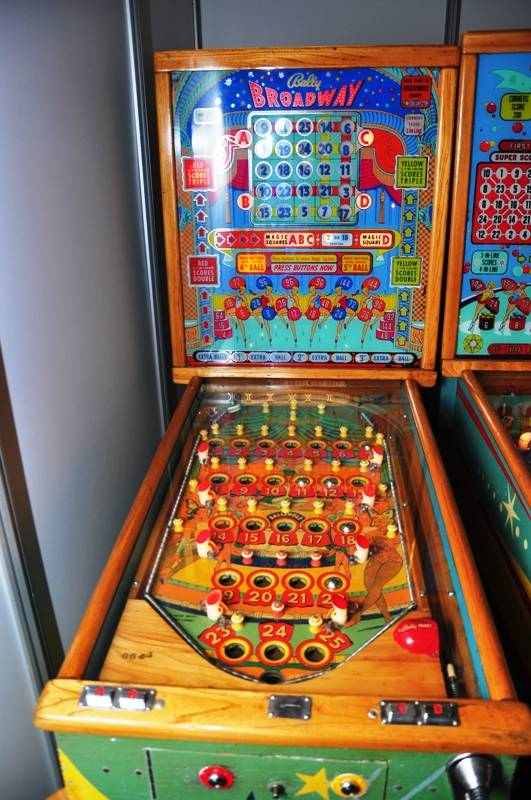