And Experience this Awesome Mobile Board Game 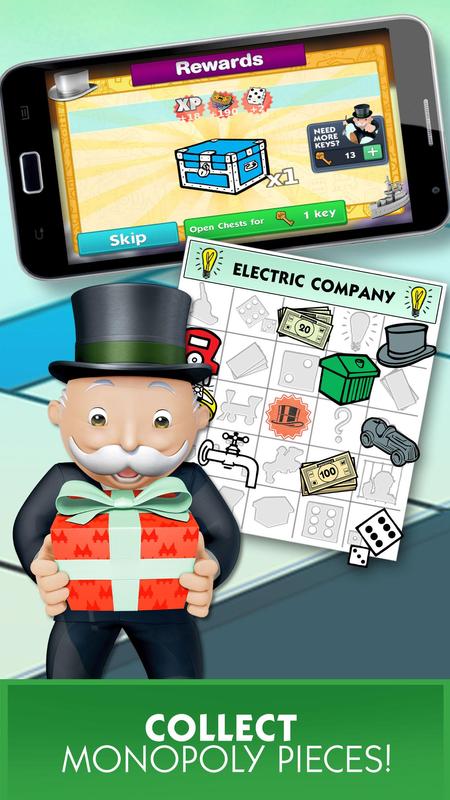 Monopoly Bash is a new bingo room in the classic Bingo Bash game. It is a totally unique experience, thanks to an unprecedented collaboration with the actual Monopoly brand – which means that all the symbols, characters, and commands are there in all their glory. Or in other words, this is the real deal! The actual incarnation of the mobile game you’ve been waiting for!

How it works is simple. Once you download the Bingo Bash game, you will need to collect enough chips to move up from level 1 to level 3. Don’t worry if that sounds daunting. This game is designed to let you climb the levels easily.

Once you get to level 3, you will see a popup on your screen asking you how you would like to proceed. Now’s the time to click Monopoly Bash – and begin to experience all the excitement that entails.

The heart and soul of the Monopoly Bash experience is undoubtedly the Monopoly Bingo game. And if you have ever played the board game – which we’re guessing you have – you know what it’s about. Rolling the dice, collecting properties and rents, and the Chance and Community Chest cards with their corresponding quests. All the elements are there in this new handheld version of the game. And it works as you’d expect, with a few special twists that work in your favor.

The resemblance to the board game is apparent from the get go. As soon as you see the first screen, in which you choose your piece, you’ll already know what you’re in for. There are four classics from which you can choose: the top hat, the boot, the car, or the dog.

Once you have chosen your piece, or what the Monopoly brand actually calls a token (how’s that for a bit of history?), have a look at the board on your screen. We’re pretty sure you’ll be delighted by what you see – a totally familiar, slightly scaled-down version of the original board game. That is, there are four colors of regular properties along each side of the board, as well as water and electricity utilities, plus two train lines in between. Each corner is marked respectively, including go to jail, visiting jail, free parking, and pass Go, just as you would expect.

The game functions in a similar fashion to the original board game, though in this version, you aren’t playing against other players. Instead of bringing your opponents to bankruptcy, you are simply collecting properties and/or rent, as well as gifts, chips, and prizes along the way. What could be more fun than that, right?!

To begin the action, MR. MONOPOLY (who you’ll find hanging out on the right side of your screen) will give you the directive to roll the dice. Once you roll the dice, your piece will automatically move forward the number of places you have rolled.

When you land on a property, you will be given a choice. That is, you will need to choose whether you want to collect the rent in full OR collect partial rent and add the property card to your collection. When you land on a utility or railroad card, you will simply be showered with a bundle of money instead.

Landing on the corner tiles also has its rewards. When you do so, you will be given either bonus money or one random property card, whichever luck happens to deal. Also, keep in mind just like in regular Monopoly play, you get paid every time you pass Go!

Also just like in the board game, once you collect a full set of properties you can begin to build. Although you won’t have the physical property cards in your hand to keep track, you can easily follow where your property collection stands in the progress bars onscreen. There are four such progress bars, with one such bar for each property color. Once a property progress bar is complete you can earn a house, which of course makes that property more valuable, with a higher payout. Once you build a house on each property of the same color, you can build another, further increasing your rent. After the second house comes the opportunity to build a third house, and finally a hotel. But you probably already know how that works.

Other things to keep your eyes on include the special item counter and the corresponding puzzle piece. This puzzle piece, when it becomes valuable enough, is converted into dice and gives you more rounds of game play.

Oh, and if you’re in a rush for some reason, or would like to get back to the bingo game quickly, you can always choose to skip the animation. This way the action is executed immediately behind the scenes, and the results are announced by MR. MONOPOLY in a speech bubble.

Once you have run out of dice rolls it’s back to the bingo cards to earn yourself some more. And chips and good times along the way! True, we’re guessing what you really want is to spend as much time as possible at the Monopoly board part of the game, and we certainly don’t blame you. But, luckily you’re in for a great treat…

The MONOPOLY theme is also clearly felt in the bingo part of this game. The standouts are the MONOPOLY man (aka MR MONOPOLY himself) and the hundred dollar bills. And each of them has a special role to play.

Basically, as numbers are called, and you daub the ones you are lucky enough to have on your card, you also potentially unveil hidden $100 notes, which MR. MONOPOLY wants to collect. But he needs you to clear the way, by daubing the numbers around, and opening up a path for him to get to them. By the way, while some numbers hide one $100 bill, others have two, which makes for double the fun and more money for MR. MONOPOLY to collect!

Once you collect the required number of cash notes, it’s bingo time!! That means in addition to other prizes you have accumulated along the way, you are awarded anywhere from 1 to 3 Monopoly dice rolls. Yes!! That means it’s time to flip back to the Monopoly part of the game, where your fortunes continue to unfold. And then it is back to bingo to gather more rolls, so you can keep advancing in the property development game.

Monopoly first came on the scene in 1935. Developed by Parker Brothers, and now a Hasbro title, Monopoly was actually based on an earlier incarnation called The Landlord’s Game (which itself was developed circa 1903) and found itself a receptive audience during the dark days of the Depression era.

The goal of the game is basically to drive other players to bankruptcy, and was originally meant as a tangible way to teach a lesson in economics and taxation. The word Monopoly, after all, is about one entity (in this case, hopefully you) dominating a market (in this case the Monopoly board), and shows what happens when all property and utilities are in one person’s hands.

Despite its harsh premises, the game has since cheered up (or at least seriously engaged) millions of players the world over. In fact, it is so beloved, that it is currently available in over 37 languages and more than 100 countries, and has had many localized and specialized versions created ever since.

A true pop culture icon, multiple generations have now grown up on this highly competitive, adrenaline boosting game. And now with the GSN Monopoly Bash game, Monopoly is available to you in an entirely refreshing way, bringing an completely new experience to a comfortably familiar game. Or as some might say – Monopoly Bash is the ultimate game with all the elements that we as players truly love. The lottery-like thrill of a Monopoly themed bingo game, mixed with the absolute best classic board game fun to be found anywhere, combined into one.

Available as an app to download for Android, iOS and even Facebook, Monopoly Bash is one of the most enthralling mobile games to come to market in ages. And it is absolutely free to download!

All it takes is a quick click to add this game and get started collecting cash bills, building up your properties, and being a part of one of the most exciting Monopoly games around. So get started today and enjoy the thrills now so easily available at your fingertips, for free.

Short description of MONOPOLY Bingo! APK Game – Play MONOPOLY Bingo games FREE with the award-winning mobile bingo app! Combine classic MONOPOLY rules with bingo boards and VOILA! You get MONOPOLY Bingo! In our free online bingo game, you can play with MULTIPLE bingo cards – more than any other bingo game out there!

With over 5 million installs, we bet you’ll LOVE MONOPOLY Bingo too!

Multiple Bingo Cards at a time
Play MONOPOLY Bingo with more bingo cards than any other bingo game! Try your luck by playing with up to 8 bingo cards simultaneously, using smooth controls to easily switch between them. Unlock more bingo cards by completing MONOPOLY game-themed collections!

Bingo Tournaments & Weekly Puzzle Events
Compete against friends in our free MONOPOLY Bingo game’s tournaments! Play free games and see which of your friends can complete the most Bingo cards! With our multi-level boosts, you can see future bingo numbers, get free daubs, and bonus spaces on your bingo cards to help you win. If you ever run out, you can always use the MONOPOLY money you collected to buy more.

Features
-Collect Community Chests to gain coins, extra boosts, bingo tickets and more as you move along the MONOPOLY board.
-Build houses and hotels by gaining experience in different rooms.
-Visits your favorite MONOPOLY properties such as St. James Place, Electric Company, or Boardwalk.
-Travel across classic MONOPOLY properties to reach places around the world.
-Increase your MONOPOLY fortune!

MONOPOLY Bingo is such a fun game to play! Classic MONOPOLY pieces combined with bingo cards makes for an irresistible, fun time! Play live bingo with other players from around the world. With more bingo cards than any other game, you’ve got AMAZING chances to win! So what are you waiting for?! Get out your bingo daubers and starting calling out “BINGO!”

Please note: MONOPOLY Bingo! is an online only game. Your device must have an active internet connection to play.

Please note that MONOPOLY Bingo! is free to play, but you can purchase in-app items with real money. To disable this feature, go to the Google Play app on your device, tap the Menu button, select Settings > Use password to restrict purchases. Then follow the directions to complete setup. In addition, MONOPOLY Bingo! may link to social media services, such as Facebook, and Storm8 will have access to your information through such services.

Note: READ_PHONE_STATE permission is used to help us remember your progress.

Storm8 Studios is the #1 Mobile Social Game Developer on Android.